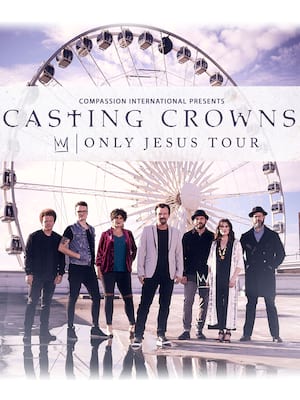 Casting Crowns is a Grammy Award and Dove Award-winning Christian rock band. The band was founded in 1999 by youth pastor Mark Hall. He initially started the band at a church in Downtown Daytona Beach, Florida as part of a youth group but the band's popularity has now extended far beyond the reaches of their home town. In with Hall on lead vocals, the band moved to Stockbridge, Georgia, added some new members joined and created the band now known as Casting Crowns. Since their inception over 15 years ago, the seven-strong group of musos have released twelve studio albums!

Their most recent being 'Only Jesus', has led the band to hit the road in 2020 in support. The Only Jesus Tour will feature special guest, Matthew West.

Suitable for audiences of all ages

About Saginaw Theater: We are an independent show guide not a venue or show. We sell primary, discount and resale tickets and prices may be above or below face value.

View all times and dates

Rick: “More than a concert, it was worship!”

Crowns' music is fantastic! A message in every song and you can hear the... more

Casting Crowns is not playing to entertain hence maybe some feel that it's... more

Sound good to you? Share this page on social media and let your friends know about Casting Crowns at Dow Arena.